TheNewsDigit
Home Daily News Abhimanyu Mithun picks up five wickets in one over against Haryana in...

Karnataka is facing Haryana in Surat, Gujarat, for a spot in the final of Syed Mushtaq Ali tournament. Karnataka won the toss and decided to bowl first. Haryana was 192/3 at the end of the 19th over and then after 20th Over it gone to 194/8.

After taking a hat-trick, His next delivery was wide, and the next one produced a single. Abhimanyu Mithunwith finishes innings with figures of 5/39 in four overs.

Mithun had snared a hat-trick in the Vijay Hazare Trophy final against Tamil Nadu last month. 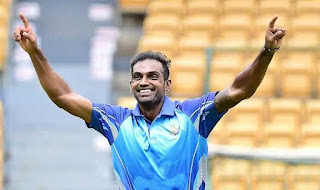 Abhimanyu Mithun (born 25 October 1989) is an Indian cricketer. In first-class cricket, he plays for Karnataka. A right-arm fast-medium bowler, Mithun was called up to the India squad for the first Test against South Africa in 2009–10, only ten weeks after making his first-class debut. He has also played in the IPL for Royal Challengers Bangalore. In November 2019, he became the first bowler to take a hat-trick in all three domestic formats of top-level cricket in India.