This time to weekend ka waar with Salman Khan in Bigg Boss13, already one episode is gone yesterday. In the last latest episode, Salman Khan was very angry upon the contestants specially Madhurima Tuli, Vishal Aditya Singh and Paras Chapra. Salman Khan asked Mahira that is she knows about Paras Chapra and his girlfriend? Mahira replied yes she knew that. In this conversation Paras got angry on the same topic of Salman Khan and shouting, after that Salman so much angry about Paras Chapra’s behavior and told to Paras Chapra that do not talk like shouting with him. 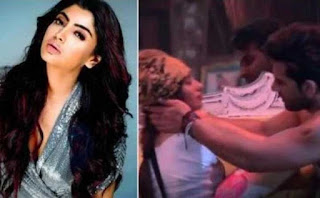 Salman Khan told everything about Paras Chapra in front of everyone that Paras’ clothes, shoes and in one episode where we saw every contestant’s family send tiffin into Bigg Boss house, therefor Paras Chapra his girlfriend Akansha Puri send the tiffin for Paras Chapra.

Yesterday episode we saw that Paras Chapra’s girlfriend fully support Paras Chapra, but Paras told that he did not need any support from his girlfriend, she voluntarily support him, and he also wants to broke up with her but she did not broke with him. But Salman said to Paras Chapra that firstly he needs to solve his problem and after that, he make relation with others. In this topic Paras and Mahira both denying that they are not in a relationship they just good friends that’s it. But Salman Khan tells them that their relationship, not just a friend it’s more than that, people misinterpret their relationship. Salman Khan also told Mahira that be careful in that Mahira cleared Salman Khan that she knew everything about Paras Chara’s life and according to her he is not fake at all.

After completing such conversation Paras Chapra said sorry to Salman Khan and justify himself that he didnot mean to shout on him if that voice heart Salman Khan than he should be sorry and said sorry. Salman Khan advises him that he never talks like that anymore because that voice really sounds bad, he just does his duty to inform Mahira Sharma about Paras Chapra it. If Mahira knows everything then it’s cool. And another advice gave to Paras Chapra that never abused anyone’s father or mother.