In Bigg Boss13, this week fired in the house, because we saw so many fights between contestants and entertainment and emotions. Because this week was a family special week where everyone’s family member had came into the house and met their family members and gives encouragement to them. there were so many reactions had seen after meeting family members. 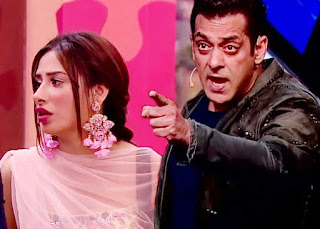 But the most highlight scene in this week was that Madhurima Tuli and Vishal Aditya Singh’s fights. Where Madhurima Tuli was beating Vishal Aditya Singh with pan, that scene was hatred moment in Bigg Boss13, this incident going to be very bad in later Bigg Boss gave them punishment to both. The punishment was they enter into the jail given by Bigg Boss till the weekend ka waar.

In last weekend ka waar we saw Salman Khan warned Madhurima Tuli and  Vishal Aditya Singh for their violent behavior and they understood, but this week they did much more big thing which was never tolerated in Bigg Boss house ever.

So in this weekend ka waar episode we will see that Salman Khan getting very angry on all the contestants and specially Madhurima Tuli and Vishal Aditya Singh. This episode going to be very special where we will Salman Khan’s angry on contestants for their behavior, which was really very bad to see on television.

We noticing Madhurima Tuli’s behavior on the first day which was not actually sweetly, actually nothing doing in this house and she has a problem with most of the contestants. Finally in this episode, we will see what action giving by Bigg Boss and Salman Khan. For more latest update check here.

Obtain Newest Motion pictures or Stream On-line – Is It Authorized?