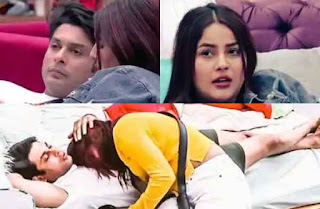 Shehnaz Gill slapped Siddharth Shukla ??? But this statement is not fully correct. Everybody knows that aggressive nature is not acceptable in Bigg Boss House. If it actually happens then Bigg Boss throws out Shehnaz Gill from the show. According to the viewers we know that Shehnaz Gill and Siddarth Shukla’s relation is very pure relation. Shehnaz upset with Siddarth last one week because she expects to give more attention from Siddharth Shukla. But Shehnaz feels she didn’t give priority over the Mahira Sharma. Siddharth Shukla prank with Shehnaz Gill because he knows that Shehnaz’s nature is childish nature. Shehnaz is affected when he didn’t give attention. We see that last day episode Siddharth ignore Shenaaz Gill so Shehnaz feels sad and angry with Siddharth’s behavior so Shehnaz slapped Shukla.


We see the above the line there is no big issue between Siddharth Shukla and Shehnaz Gill. It is a part of friendship.