TheNewsDigit
Home Entertainment Bigg Boss 13 9th January 2020: Shehnaz Gill Confess her Love To...
In every Bigg Boss season, so many relations were made and broke but some of this some relations are very popular which people never forget like Gauhar Khan and Kushal Tandan, Tanisha Mukharjee and Arman Kohli, etc. In Season13 of Bigg Boss, there is also so many relationships made like Arhan and Rashmi, Devoleena and Rashmi, Paras and Mahira, Siddharth and Shehnaz, Madhurima and Vishal. 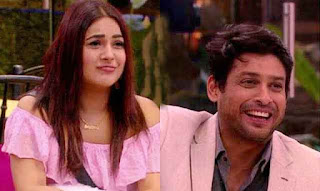 In the last episode Siddharth Shukla asks Shehnaz Gill, Is she fall in love with him??? Shehnaz answered she loves him so much also possessive but not that kind of love. Actually, we saw Shehnaz Gill a little bit confuse about her love, she doing all such things which are actually doing a possessive girlfriend.

Anyway, they never separated from each other because they can’t leave without each other but now they solved their problem and stay together. Must watch today’s episode where we see entertain ka hangama with Harish.