Bigg Boss 13 Weekend ka Waar 18 January 2020: This Weekend Ka Waar Salman Khan gets angry on most of the contestants in the Bigg Boss house. We saw in the promo of Saturday weekend ka waar where Salman Khan was very angry at Paras Chapra for his relationship with Mahira Sharma and abused Sana’s father. In a family week, we saw Sana’s father reaction on Paras Chapra, where we clearly saw Sana’s Father does not like Paras Chapra at all and he also warned Sana to do not talk with Paras Chapra ever, because according to him Paras is the big enemy of Sana in this Bigg Boss house. 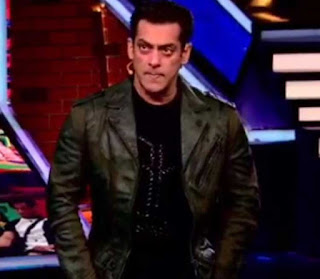 When Sana’s father warned Mahira also to stay out of Paras Chapra because he is the one who first used the jealous after this Paras was angry on Sana’s father and told some abused or insult him and also abused him Sana.

And we saw in the promo that Salman Khan also questioned about Paras Mahira’s relationship and said that their relationship is not a simp-le friendship it is more than that. And Salman Khan also mentioned Paras Chapra’s Girlfriend Akansha Puri who is now outside of the house, when Salman Khan mention Akansha Puri’s name than Paras Chapra also gets angry and said that to Salman Sir why this topic discussed there because that was his personal thing.

We also saw Paras Chapra also justifying his self in loudly which was not taken by Salman Khan and Salman Khan was very very angry at that time on Paras Chapra. Actually, in the last family week, Mahira Sharma’s mother entered the house and in front of Paras Chapra mentioned his girlfriend’s name and told that she is very cute and Mahira his very good friend which is always there.After that Mahira’s mom also told Mahira that she should maintain some space from Paras because their closeness does not like by her mom.


The same thing was repeated when Paras Chapra’s mon entered into the house and in front of Mahira said that to her son Paras it’s time take stand and inside the house Paras mom said that Paras closeness to Mahira she did not like it and for this friendship his game going to be weak day by day. So for the latest update check here!