PUBG Mobile 0.16.0 Update December 2019: Good News for all the PUBG lovers out there. PUBG Mobile New Update 0.16.0 Coming very soon with amazing features, New Mods, Maps, and Others. As per leaks, it confirms the PUBG Mobile New Update will arrive on 11th December 2019 on Google Play Store. And after within 2 or 3 days, you will get new mods on your map like snow in Erangel map, TPP to FPP switch, New Passenger lift, etc. 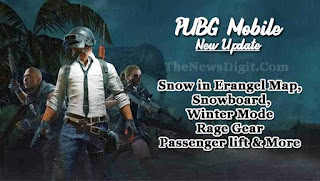 PlayerUnknown’s Battlegrounds (PUBG) is an online multiplayer battle royale game developed and published by PUBG Corporation, a subsidiary of South Korean video game company Bluehole.
PUBG Mobile frequently add New features in this game to attract player and experience new things. This winter PUBG Mobile coming up with bundles of new features which going be more exciting for Players. Here are all the details of New Features coming up with the Update of 0.16.0

The player can experience snow in  Erangel Map with the New Mode Called “Snow Mode“. Players can find this mode randomly like others.

Death race mode also called ‘Rage Gear’ and it will be available in EvoGround. Rage Gear mode involves a death race-like situation where players battle against enemies in armored vehicles in a warehouse-like venue in Miramar. Here, the motive is to kill enemy players using the armored vehicles or use special heavy weapons available for this Rage Gear mode. Players will also get access to special crates spread around the course which have to be collected from the car itself.

In which year the Mysore State was Renamed as Karnataka?

What is the Screen Size of the New Boat Watch Enigma?